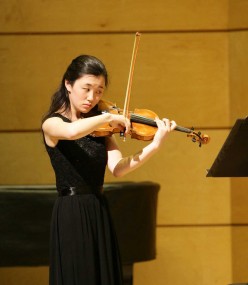 Sarah Yang, a resident of Vancouver, Canada, was first inspired to play violin when she was eight years old. Now 17, she actively participates in her community through orchestras, chamber ensembles, festivals and performing at local events and senior homes. She currently studies with Taras Gabora, and has previously studied with Lucia Schipperus and Jeanette Bernal-Singh. Sarah participated in the Casalmaggiore International Festival in Italy during the summer of 2015. She was also the Concerto Competition winner at the Langley Community Music School in 2014, appearing as soloist with the school’s orchestra, and has won several other awards at the school. This past year, she was given the opportunity to perform with the Vancouver Symphony Orchestra as well. She firmly believes that “nothing will ever be as exquisite or genuine as the freedom of expression given through music,” and she hopes to pursue music as a teacher and chamber musician in the future.