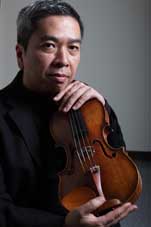 Born in Taiwan, Nai-Yuan Hu began studying the violin at age five and was soloist with the National Youth Orchestra of Taiwan three years later. He came to the United States in 1972 to continue his studies with Broadus Erle, Joseph Silverstein, and Josef Gingold. He was Mr. Gingold’s assistant for two years before embarking on the concert career. He and his wife June Huang currently live in New York City.

Since winning the First Prize in the prestigious Queen Elisabeth International Competition in 1985, violinist Nai-Yuan Hu has appeared on many of world’s renown stages, including the Concertgebouw in Amsterdam, Avery Fisher Hall in New York, Suntory Hall in Tokyo and other major venues throughtout Europe, North and South Americas and Asia. In praise of his playing, BBC Music Magazine wrote, “Taiwanese violinist Nai-Yuan Hu is an awesomely capable performer whose technical facility, musical intelligence and unfaltering verve place him among the higher echelons of today’s string virtuosi.”

As a recitalist, Mr. Hu performed in such venues as Alice Tully Hall and Weill Recital Hall in New York, Cité de la Musique in Paris, Purcell Room in London, Casals Hall in Tokyo, and Jordan Hall in Boston where he premiered Bright Sheng’s “The Stream Flows” in 1990. He has appeared either as a guest soloist or chamber music artist in such festivals as Mostly Mozart, Marlboro, OK Mozart, Seattle, Seoul Spring Festival, Grand Teton, and Newport. He collaborated with Fou Ts’ong, Martha Argerich and Misha Maisky in the 1999 Beijing Music Festival.

Nai-Yuan Hu is the Music Director of Taiwan Connection Music Festival, which he founded in his native homeland in 2004 to bring together talented Taiwanese musicians from home and abroad in chamber music performances. The festival has the further aim of promoting classical music all over Taiwan, often reaching general public beyond the usual concert hall setting. In the spirit of chamber music collaboration, a string orchestra was formed in 2007, and two years later, a full complement of winds was added to form the TC Chamber Orchestra, performing always without a conductor. In the 2010 festival, TC Chamber Orchestra tackled Beethoven Eroica Symphony, receiving much critical acclaim.

Mr. Hu’s recording of Goldmark’s Concerto and Bruch’s Concerto No. 2 with Gerard Schwarz and the Seattle Symphony (for the label Delos) garnered “Critics’ Choice” from Gramophone as well as praises from many publications includingBBC Music Magazine, The Times of London, and The Washington Post. His solo violin album “Unaccompanied…” for EMI label received two Golden Melody Awards in Taiwan for best classical album and best instrumentalist. In 2003, he released “Vienna Revisited” which comprises many of the beloved violin pieces from a bygone era.