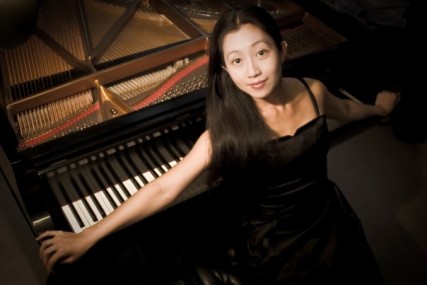 Pianist, Melody Yvonne Chan, is a vibrant and versatile artist who lends herself to numerous musical projects and endeavours.  Currently based in downtown, Toronto, Ms. Chan recently completed her Doctoral of Musical Arts degree in piano performance at the University of Toronto, under the tutelage of James Parker. She enjoys performing throughout the city and has performed as a guest soloist at the St. Andrew’s Church noon-hour concert series, Nuit Blanche, and at the Toronto Women’s Musical Society, to great appraisal.
Ms. Chan was born in Los Angeles, California, but quickly relocated to Vancouver when she was four years old.  Her musical studies commenced with her father around age five, which quickly led to several top prizes and scholarships from several local music festivals.  At age fifteen, she was selected to perform in a cultural event titled, “Night of Nations” to celebrate young talent in the city of Vancouver.  Furthermore, Ms. Chan has participated in the finals of the CMC and was invited to perform at the gala concert.
Upon acceptance into the University of British Columbia, Ms. Chan was awarded the Erzabeth Gessler Memorial Scholarship.  Throughout her studies, Ms. Chan has had the great privilege of working under a broad range of teachers who have greatly inspired her musical pursuit.  Her private teachers included Jane Coop and Henri-Paul Sicsic, and her chamber music instructors included Amanda Chan, Karen Lee-Morlang and Rena Sharon.  Upon graduation, Ms. Chan was invited to become a member of the Golden Key Society, exclusive to the top ten percent of her class.
Ms. Chan relocated to Toronto to begin her Masters of Music degree with top scholarship at the University of Toronto with Henri-Paul Sicsic.  During her studies, she was selected to perform for Angela Hewitt in a public masterclass.  She has also had the privilege to play in masterclasses for James Parker, Marietta Orlov, Francine Kay and David Louie.  Participation in summer music festivals have also enabled her to work with renown teachers Jacques Rouviérè, Jean Saulnier, Maneli Pirzadeh, Richard Raymond and Lee Kum Sing.
Shortly after marrying fellow pianist, Matthew Li, the pair founded a piano duo named “Duo Interplay”.  They made their Vancouver debut in the International NorthWest Piano Ensemble competition and were awarded third prize for their brilliant performance.  The duo continues to perform throughout Toronto.
Ms. Chan also enjoys a vast range of accompanying experience and has worked with Ballet Jorgen, as well as various other independent artists in the city.  She will make a debut guest appearance with the Toronto Messiaen Ensemble in the coming season.