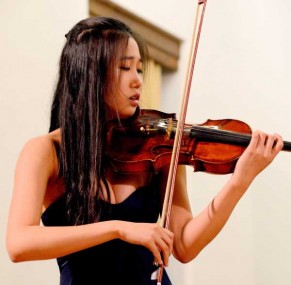 Melody Ye Yuan began lessons in China at the age of five with Ms. Zhao Xiao Mei and at nine came to Vancouver to study with Taras Gabora. She has already performed in six countries (Canada, USA, Italy, Germany, Russia, Austria) and the seventh took place in May 2014 in the country of her birth, China, with two solo recitals in Beijing and Guangzhou. Melody Ye Yuan promises to make an important solo career. Already at the age of seventeen she has astonishingly mastered and performed a large part of the major repertoire for the violin. Melody Ye Yuan’s debut with the Vancouver Symphony Orchestra was Sarasate’s Zigeunerweisen, which took place in February 2012 with Maestro Bramwell Tovey. On March 21 and 22, 2014, she performed the second movement of the Max Bruch Scottish Fantasy, the first movement of the Sibelius concerto in March 2015 and Vivaldi Summer (four seasons) in July 2015 with the Vancouver Symphony Orchestra. In May 2014, she gave two recitals in Beijing and Guangzhou, China. In June 2014, she gave recitals in Leipzig, Mainz and Eckelshausen in Germany and in July 2014, at the Casalmaggiore International Festival in Italy. She is also a soloist with the MainzerVirtuosi in Germany in the CD (Seasons, Vivaldi and Piazzolla) recorded in August 2014. Melody has won numerous prizes and awards, notably 1st Prize at the Yankelevitch International Violin Competition in Omsk, Russia at the age of eleven, the Gabora Prize for the best performance at the Casalmaggiore International Festival in 2012 and 2013, 2014, second prize in the Friends of Chamber Music Festival 2012, and first prize at the Bjorn and Lori Hareid Strings Competition 2014 at the Vancouver Academy of Music. Melody is performing on a Carlo Giuseppe Testore violin made in 1708.