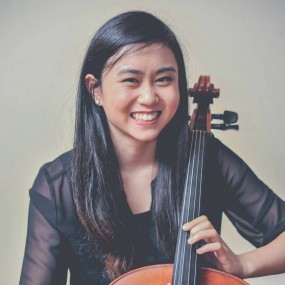 Lindsay Cheng is currently a second year undergraduate cellist at New York University, studying under Professor Marion Feldman. She plays a cello made by Ernst Heinrich Roth in Markneukirchen, Germany, generously loaned to her by the Carlsen Cello Foundation. Her recent awards include being selected as a first prize winner with the New York Concerti Sinfonietta as well as being selected a winner of the 2015 Young Musician’s Concert where she performed at Carnegie Hall. Lindsay is also a two­time winner of the Young Musician’s Concert hosted by the Chamber Music Society of Lincoln Center, where she performed at Alice Tully Hall. She has participated in chamber music master classes with many guest artists including Hiroko Yajima, Daniel Phillips, Robert Chen, Steven Tenenbom, Annie Fullard, and Nicholas Canellakis. An avid orchestral player, Lindsay has served as principal cellist at Eastern Music Festival as well as in her high school pit orchestra where she played in the operas, Die Fledermaus, La Boheme, and Die Zauberflote. She was assistant principal cellist in the Philharmonic orchestra at Mannes in the Pre­College division, and has also been a member of the Philharmonic orchestra at the Manhattan School of Music in the Pre­College division. Currently, she is a member of the New York Youth Symphony. Lindsay has had the privilege of studying under Ole Akahoshi, as well as Hannah Holman. Most recently she studied under Hans JØrgen Jensen at the Meadowmount School of music.