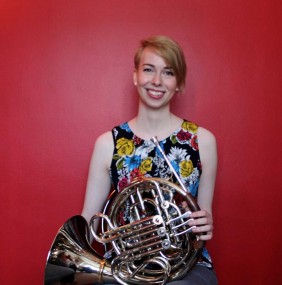 Leslie Hutchinson is a 23 year old french horn player who recently graduated from Brandon University with a Bachelors degree in Brass performance.
Earlier this year she participated in the Brandon Festival of the Arts where she received the Beta Sigma Phi trophy in Brass (2015)
She has an affinity for New Music and premiered electronic works at the first ever Wheat City Nuit Blanche in 2016.
She has toured to Nashville, Tennessee to take part in the National Small College Intercollegiate Band (2015), to Oslo, Norway with the Qui Quintet to take part in SummerAcademy Voksenasen (2015) and to North Carolina with the Brandon University Brass Sextet (2016).
In addition to her performance endeavors she works as the administrative intern for the Eckhardt-Gramatte National Music Competition.