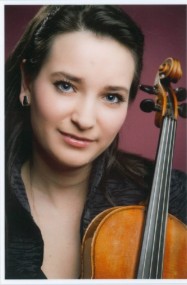 Born 1985 in Bulgaria, Irina Borissova came from a family of musicians. At a very early age, she showed exceptional violinistic talent and gave her first solo recital at the age of nine. Shortly thereafter, she was invited to perform with various orchestras in Lalo’s Symphonie Espagnole at age 13, and Paganini’s D major Concerto the year after. Since then, she has appeared as soloist with orchestras in Germany, Austria, England, Italy, and her homeland, and has been broadcast on several radio stations in Bulgaria, Germany and Italy.

Irina studied at the Musik School “Lubomir Pipkov” with Prof. Josiph Radionov (1999-2004) and since then at the Musikhochschule Mainz with Prof. Anne Shih. From the age of eleven she has been the winner of a string of awards, including First Prize at the International Competition “Mozart” in Sweden, Koczian in Czech Republic, Svetoslav Obretenov, Dobrin Petkov, and “Hope, Talents and Masters” in Bulgaria.

As chamber musician, she has performed at numerous international festivals with renowned international artists such as Roger Chase, Emil Rovner, Pavel Kolesnikov, Manuel Fischer-Dieskau, and Connie Shih. She has also served as soloist/leader of the Mainzer Virtuosi, and is frequently orchestral concertmaster under such conductors as Phillip Mann, Achim Fiedler and Tanya Prochazka.

Irina has a special interest in the interpretation of modern music. In 2002 she gave the world premieres of several works as soloist with the Plodiv Philharmonic. In 2007 she was invited by Arvo Pärt to perform his Tabula Rasa in Germany. She has recorded the world premiere of Peter Seabourne’s violin concerto This is a song for you alone, and Malcolm Arnold’s Concerto for Two Violins, which appeared under the Sheva label and garnered critical praise from Gramophone Magazine and Neue Musik Zeitung. Irina appears as soloist and concertmaster on a second CD of The Seasons of Vivaldi and Piazzolla with the Mainzer Virtuosi which received an excellent review in Das Orchester. In 2014 she performed the world premiere of Hans Kunstovny’s Krivo for solo violin and chamber orchestra, a piece dedicated to her and the Mainzer Virtuosi.

Irina also has an avid interest in Baroque performance practice, inspired by her work with Elizabeth Wallfisch, Prof. Felix Koch and Michael Hofstetter. She is a member of the Neumeyer Consort in Germany.

Irina has been on the faculty of the Johannes Gutenberg University of Mainz since 2013, and plays a violin by Alessandro Mezzadri c.1720, courtesy of Guarneri Hall NFP and Darnton & Hersh Fine Violins, Chicago.