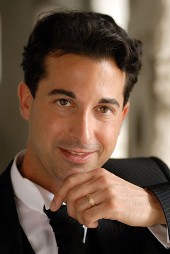 Critics describe him as having “the striking maturity of an artist” ( Il Corriere della Sera , Rome) and “a really explosive personality that immediately captures your attention and fascinates you” ( Il Giornale , Milan).

He also performed in recitals and as soloist with orchestras in Austria, France, England, Denmark, Belarus, Russia, Sweden, Romania, Lithuania, Switzerland, Germany, Slovenia, Finland, Serbia, Cyprus and China. In the United States, he performed in Chicago, Boston, Cleveland, Los Angeles and he made his debut in New York playing Mozart KV 467 in Merkin Hall , with the New York Chamber Virtuosi directed by Igor Bukhvalov.

Piano Professor at the Conservatory “N. Paganini” in Genova, Battarino is a member of the Festival’s faculty since the first edition in 1997. He has taught masterclasses for the Universität Mozarteum in Salzburg, Austria, Cyprus College in Nicosia, Cyprus and Liverpool University in Liverpool, England. In China, he was appointed honorary professor at the Shandong University in Weihai (2006) and the Central National University in Beijing (2007).