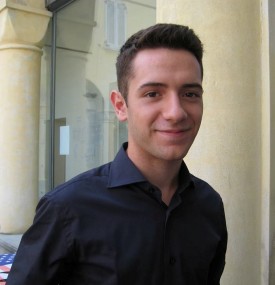 Francesco Bini was born in Genoa, where he began studying piano in the
Accademia Ducale di Musica with Giacomo Battarino. He attended the
courses with him in Zoagli (“Jupiter”, 2013) and at the Casalmaggiore Festival (2013,2014).
He has won several prices at national piano competitions: 2nd prize at the Concorso pianistico in Rivarolo Canavese, and 3rd prize at the
Concorso Pianistico “Città di Albenga” and at the Rassegna Musicale
“F.Mendelssohn” in Alassio. In November 2015 he will begin studying at the Conservatory of Music “A.Vivaldi” in Alessandria, in Battarino’s class.