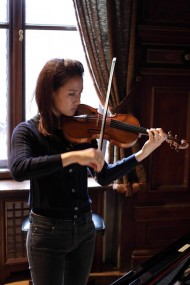 Eun-Sol Youn , the violinist who was born under musician parents learned musical instruments naturally and graduated from Yewon School and entered early the Korea National University of Arts in 2004 with the guidance of the professor, Nam-Yun Kim.
She won the first prize at Busan Music competition (2004), the first prize at Jungang Music competition (2006) and swept all the 1st prizes in all of the prestigious competitions such as the KBS Korean Music competition etc in 2008 in Korea and received much attention from our music world.
Other than that, she has been awarded of the 1st prize at the Music journal, 3rd prize at the Hankook Ilbo competition, 2nd prize at Baroque competition, and 2 special prizes at the Henri Marteau compeptition Finalist(2008) held in German. She was selected as a scholarship student at Japanese Ishigawa Music Academy and was even invited to the Korean-American General New Year Concert. Youn Eun-Sol won the international competition of  Torun violin competition 3rd prize and 19th Postacchini which brought down a curtain in Fermo, Italy, verifying herself one more time as the position of the next generation artist.
The performance activity of her so far include national and international prestigious orchestras such as the recital of Kumho-yeongjae(talented people), Kumho artist recital, KBS symphony orchestra, Korean symphony, Incheon Philharmonic Orchestra, Busan Philharmonic Orchestra, Daegu Philharmonic Orchestra, Masan Philharmonic Orchestra, Jinju Philharmonic Orchestra, China Tanjin Orchestra etc. She is a rising star who has collaborated with those orchestras and is parading active music activities.
She studied under Kim Nam-Yun and Christoph Poppen, graduated from Korea National University of Arts in 2008, graduated from the Professional courses in 2011 and is currently studying in München, German.