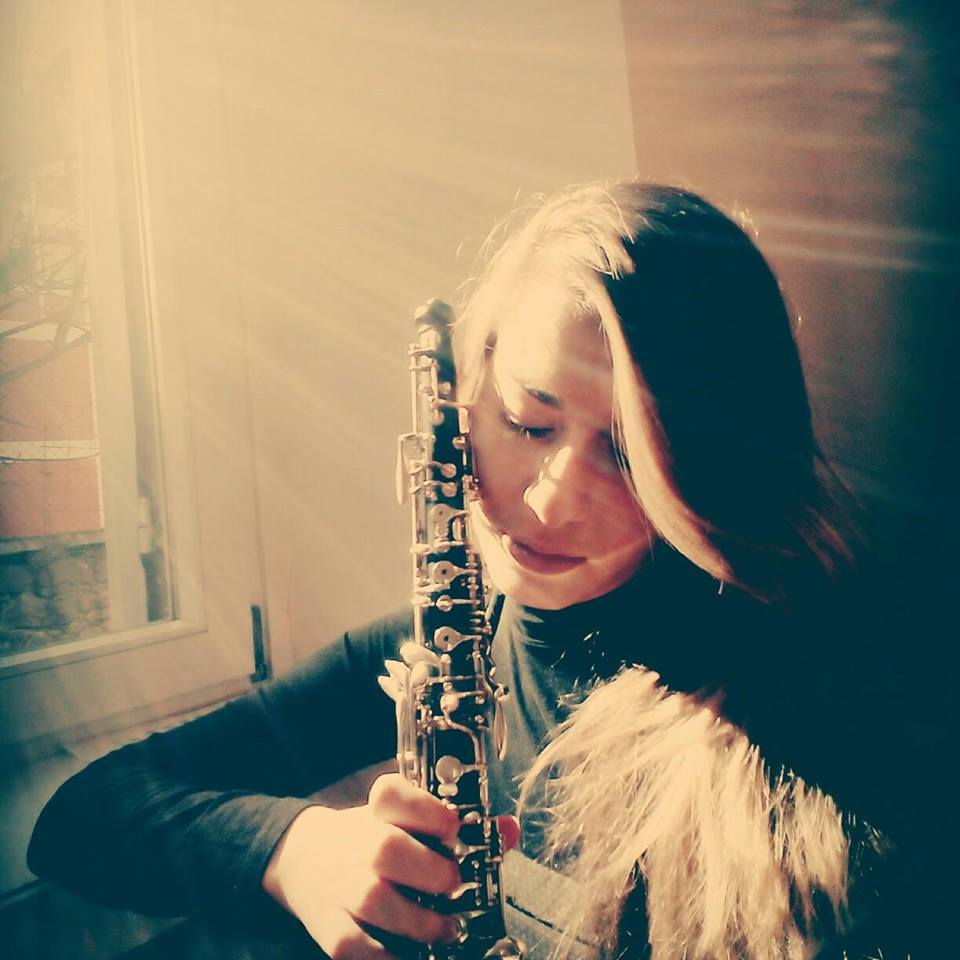 Born in Seville in 1992. At the age of seven began her musical studies at speciality of oboe in the Conservatory Profesional of Music “Francisco Guerrero” of Seville, where she made elementary and professional music studies during ten years, ending in 2010. At the same year she began her advanced studies in Oboe (Bachellor) in the Conservatory Superior of Music “Manuel Castillo” of Seville, ending in Juny of 2014 with Bachellor Award. In October of this year she began her oboe studies of Master with the important oboist, composer and Professor Arnaldo De felice of Italy, in the Conservatory “Claudio Monteverdi” of Bolzano (Italy). She gets the highest votes during the first year of Master.
She has received masterclass from Christian Schmitt, Hansjörg Schellenberger, Vicente Llimerá and Jesús Fuster. During two years (2011-2013), she was student from the Barenboim-Said Academy for the orchestral studies, with the important oboists Gregor Witt and Fabian Schaffer.
Under the direction of the Professor Arnaldo De Felice, she made since 2013 Advanced Masterclass in “Musikforum” Viktring-Klagenfurt in three consecutive years (2013, 2014, 2015), and the “Casalmaggiore International Festival” in two consecutive years (2014, 2015). The first year she has been selected for play Concerto per due oboi in do Maggiore A.Vivaldi, (Professor De Felice as first oboe). This last year at the “Casalmaggiore International Festival” she has been selected for play as solist: Concerto per oboe e archi in fa Maggiore J.S.Bach, in chamber music: Quartetto con oboe L.Gatti, and the Tre Romanze per Oboe e Pianoforte, Clara Schumann.
This August she has received by musical merits a scholarship from the Europäische Akademie für Musik und Darstellende Kunst, Montepulciano, for the Internationale Master classes in this city.
For three consecutive times during 2013 and 2015, she has been selected for play in the “Bruckner Akadamie Orchester” in Múnich under the direction of the conductor Jordi Mora, also, in the “21st Century Orchestra” in Valencia (Spain) during two summers. In summer of 2011, played with the “Spanish Russian Orchestra” under the direction of the conductor Anatoly Levin (Director of Conservatory Tchaikovsky, Moscow). In 2011, she has been selected as first oboe in the Project: Produce an Opera of the important Theather of the “Royal Orchestra of Seville”. She also played in the “Eurochestries Festival” in Paris in the summer of 2011. Also, she has played in another spanish orchestras like “Orchestra of the University of Seville”.
In this last month of September she played as second oboe (first oboe Prof. Arnaldo De Felice) in the “Monteverdi Akademie” with the prestigious violinist Lukas Hagen, into the “Alto Adige Festival”.
Recently, she played at the Ciclo “Il Monteverdi al Mercantile”, with the Prof. De Felice as first oboe, the Sonata nº 6 in Do Minore J.D.Zelenka.
In October she began her second year of oboe Master with Professor Arnaldo De Felice in the Conservatory “Claudio Monteverdi” of Bolzano (Italy).