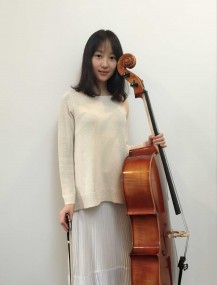 My name is Cheng Cheng. I am 21 years old. I learned to play Cello from Professor Wang since 2008 in Xi’an Conservatory of Music in Shaanxi Province of China. Since Jan. 2015 I started to learn Cello from teacher  Bo Pheng in Kwantlen Polytechnic University.
In 2010 I attended the 2010 Chinese Arts Global Golden Grog Award Talent competition and was awarded the Gold Prize in Juniors Group.
In 2010 Chinese Arts Global Competition I was granted Bronze Prize for Solo Cello of Juniors Group B.
My favorite repetoire is Bach suite No. 1.
I believe music is the best way to express various feelings of human being. It can be soothing and inspiring; therefore, music is indispensable in people’s life.
In my spare time, I like attending various concerts, playing badminton, swimming and hiking.
Date of Birth:  2nd Oct. 1993
Home Address: 2054 Western Parkway, Vancouver, British Columbia, V6T1V5, Canada