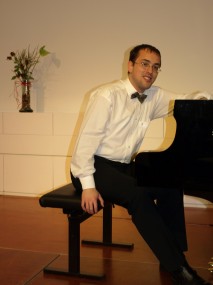 Andreas Eggertsberger was born in Linz where he studied piano with Gottfried Hemetsberger at the Bruckner Conservatory (now Bruckner University). He graduated at the age of 15 with distinction and proceeded with his studies in Salzburg and Vienna with K. H. Kämmerling and O. Maisenberg. Later he has also studied with Thomas Hecht, a former student of Leon Fleisher, at the Yong Siew Toh Conservatory in Singapore. In 2013 he finished his doctorate at University of Michigan as a student of the renowned pianist Arthur Greene. He visited Master classes with Paul Badura Skoda, L. Hoffmann, J. O’Conor, A. Nassedkin, D. Leljak, J. Rouvier, I. Kaltchev and M. Masaki.

He has won several prices on a national and international level: “Jugend musiziert”, “Ettlingen”, “Yamaha Scholarship” in Vienna and the “Gradus ad Parnassum” Competition and Louisiana International Piano Competition (Semifinalist). He appeared in the Brucknerhaus at the age of 13 and played his first piano concerto with the Bruckner orchestra in the same year. He also won the Taras Gabora prize of the Casalmaggiore International Festival 2012 for his interpretation of Beethoven’s Sonata Op.106.

Eggertsberger has appeared in concerts in Europe and Asia. He has played in the Wiener Konzerthaus, the Queen Victoria Hall, Esplanade Singapore, Beethovenhaus Bonn and others. He has made projects together with the Austrian pianist Jörg Demus and Nella Hunkins, the solo cellist of the Singapore Symphony Orchestra. He is invited regularly by the EPTA (European Piano Teachers Association) to international conferences. He made recordings for radio, TV and CD in Austria and abroad.