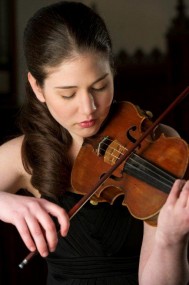 Agnes Langer  was born in Budapest in 1992, and began playing the violin at the age of 7, studying with Ágota Béres. At a very early age, she showed great talent and, after only 2 years of study, Agnes won second prize at the 10th János Koncz National Competition for Young Violinists. Since then, Agnes has gone on to win First Prize at the 2003 Eduard Zathurecky Competition and at the 8th Zoltán Kodály National Solfege Competition in 2005.

In 2005, Agnes moved to Germany to study with Prof. Anne Shih at the Hochschule für Musik Mainz, at the same time attending the Waldorf School there. Her study in Germany is made possible by financial support from a private British sponsor impressed with her talent and potential. She went on to win first prize at the 2006 Bartók National Violin Duo Competition and especially, the coveted Körösföi – Kriesch Aladàr Prize for promising young artists in 2007. In early 2008, Agnes won First Prize as well as a special prize for best performance of a Hungarian work at the Zathureczky National Violin Competition in Budapest. In 2009, Agnes won third prize and the audience prize at the First Yankelevich International Competition in Siberia. She was the youngest contestant.

Agnes has performed many works as soloist with orchestra, including Saint – Saens Introduction and Rondo Capriccioso, his Third Concerto, Haydn’s Concerto in C, Bach’s Brandenberg Concerto No.4, the Sibelius Violin Concerto, Mozart Concerto No.5 as well as Mendelssohn’s Violin Concerto. This year Agnes will perform the Beethoven Violin Concerto as well as the Mendelssohn Double Concerto with Pavel Kolesnikov in London’s Cadogan Hall. In addition, she has several solo recital engagements in both England and Germany. She has performed in recitals in Germany, Austria, Hungary, Italy, Spain, Russia, Canada and England. She is also a member of the Mainzer Virtuosi which performs internationally and has just made their first CD for Sheva Records.

She has accomplished the amazing feat of learning all 24 Paganini Caprices at the age of 15, and recorded the entire Bach Solo Sonatas and Partitas three years later.  She was invited to the RPS Awards Ceremony in London, England where her first solo CD of works by Bach, Beethoven, Hubay and Gershwin with pianist Connie Shih was introduced. In July 2012, she made her successful London debut in a recital of the entire Brahms Sonatas and Scherzo with Pavel Kolesnikov at St. Johns Smiths Square.  Agnes plays on an instrument attributed Vuillaume loaned to her by a British sponsor.