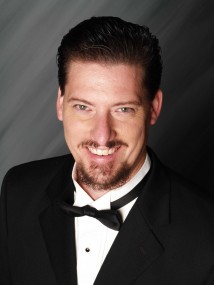 Aaron Stegemöller, Bass Baritone
Whether opera, sacred, or concert works, Aaron Stegemöller is a crowd pleaser.
From Vancouver to Florida and New York to Texas, houses across North American have well prepared this artist for a promising career. Aaron has performed in many houses including Santa Fe Opera, Lyric Opera of Kansas City, Michigan Opera Theatre, the Chicago Lyric, Opera Cleveland, and Shreveport Opera among others. For eight seasons,
Aaron has given outstanding performances of Melchior (Amahl and the Night Visitors) for Chamber Opera of Chicago. In 2011, He sang the baritone solos of Rene Clausen’s A Memorial to a sold out, turn away crowd for the 10 th anniversary performance in Florida.
In 2012, Aaron gave a commendable performance of Timur (Turandot) for Union Avenue Opera. More recent work includes Wotan/Donner (Das Rhinegold) in Vancouver, Canada as well as Dr. Bartolo (The Marriage of Figaro) with Muddy River Opera. Aaron is excited to be making his debut with Evanston Symphony Orchestra singing as the bass soloist in Verdi’s Requiem.