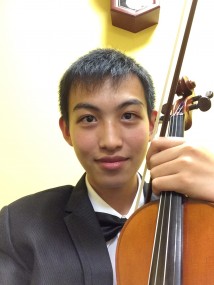 Born 1999 in Taiwan, You Xin Li began learning violin when he was in the kindergarten. His teacher is Yeh Nai Cheng（葉乃誠）now. He has won many competitions, like Tainan City Music Competition, National Student Music Competition, Rong Xing Violin Competiton and so on. He also attended Walnut Hill Music Festival and learned from Mr. Nai Yuan Hu in 2014., NTSO International Youth Orchestra Camp in 2014 and 2013. He is also the concertmaster of SiungSong Orchestra from March, 2015.