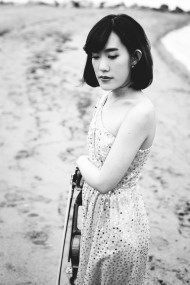 Yena Lee born in 1989 began studying violin at the age of 10 with Prof. Taras Gabora and Lawrie Hill. She has received numerous prizes and scholarships in many competitions such as Kiwanis Festival, Vancouver Academy Competitions, Canadian National Music Competition, Shean Competition, and the Wolfgang Marschner International Competition.
She made her orchestra debut at the age of 14 and in same year she was awarded the Most Promising Musician from District of British Columbia. In 2014 Yena has been selected as the only music student to be awarded JGU-Preis by the Johannes Gutenberg Universitaet Rheinland-Pfalz for its highest distinction. Yena made solo performances with the Vancouver Symphony Orchestra, West Coast Symphony with JÃ¡nos SÃ¡ndor, Vancouver Youth Symphony Orchestra, Vancouver Metropolitan Orchestra, Vancouver Pilgrim Orchestra, Mainz Hochschulorchester, Adrian Ensemble in Italy, Mainzer Virtuosi Kammerorchester, and Neumeyer Consort in Germany.
As an active chamber musician she is a member of the Mainzer Virtuosi Kammerorchester in Mainz, Germany where she was assigned the role of concertmaster for many seasons. At the age of 17, she was assigned concertmaster position for two seasons for a joint concert with Vancouver Symphony Orchestra and Vancouver Youth Symphony. At the age of 16 she was assigned as assistant coach for the junior division at the Quiring Chamber Music Festival in Vancouver. In 2010 and 2011, she gave masterclasses for Norfolk, England schools in various outreach efforts. She has attend masterclasses and has collaborated with members of the Artis Quartet, Brentano Quartet, Danish Quartet, Emerson Quartet, Gryphon Trio, Hagen Quartet, Jupiter Quartet, Miro Quartet, Takacs Quartet, Tokyo Quartet, John Adams, Syoko Aki, Ettore Causa, Roger Chase, Lucia Hall, Nai-Yuan Hu, Aldo Parisot, Krzysztof Penderecki, Rony Rogoff, Lee Kum Sing, Mikhail Voskresensky and many others.
Her performances were broadcast on art channels in Germany and Italy, and on Canadian radio stations. Yena gives regular solo and chamber music concerts throughout North America, Europe, and Asia.
She achieved the Diplom-Orchestermusik and Konzertexamen (as the youngest student with highest distinction) with Prof. Anne Shih at the Hochschule fur Musik in Mainz, Germany. She is now studying in the Master of Music program at the Yale School of Music under Prof.Hyo Kang with full scholarship made possible through the generosity of Emma Phippa and William White. Yena plays on a violin by Nicolaus Gagliano fecit Alexandri made in 1769 and French Simon bow.