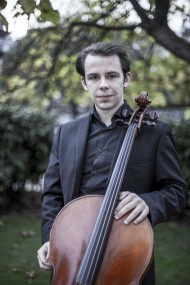 Humberside-born cellist, Thomas Bertolotti is an exciting young cellist currently studying at the Royal Academy of Music in the distinguished class of Josephine Knight. Starting the cello aged 8 he soon found an affinity with the instrument, and aged 14 began studies with the Principal Cellist of the Hallé Orchestra, Nicholas Trygstad. The following year he gained a scholarship to the JRNCM. Thomas has had lessons and masterclasses with world class musicians including Hannah Roberts, Peter Bruns and Raphael Wallfisch. Thomas has performed in venues across the UK and abroad including the David Josefowitz Recital Hall, the inaugural concert in the Carole Nash Recital Hall, Hull City Hall and Liezen Kulturhaus. Thomas holds a particular affinity with the high romantic repertoire, including composers such as Dvorak, Elgar and Rachmaninov, receiving critical acclaim for his performance of the Elgar Cello Concerto. In his rare free time Tom’s interests include football and a gam
e of chess.