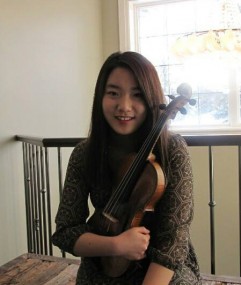 Born in Korea, 2001. Sonya Shin, a 13 year old violinist began her violin studies at the age of five. She is currently studying with Yue Deng. In 2010, she participated in the Edmonton Music Festival and received scholarships for her performances. In 2012 she performed in the Athabasca Gala Concert along with the other finalists. She is also a two time Canadian Music Competition finalist and received a scholarship for her performance in 2012. Sonya is the concert mistress of the Edmonton Youth Orchestra for 2013-2014 and 2014- 2015.  In 2013 and 2015 she was a two time Northern Alberta Concerto Competition finalist. Sonya also attended Morningside Music Bridge in 2014.