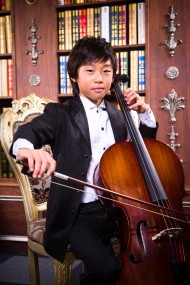 Samuel Wu, 14, has been playing cello in Taiwan and Canada for seven years. He has belonged to three orchestras and playing cello is an important part of his life. His cello stays with him, whether he’s happy or sad, and he can express his mood through music. Under the guidance of his teacher, Bo Peng, he has always been pushed to achieve his goals. He currently plays for the Coquitlam Orchestra and the West Point Grey Academy Orchestra in British Columbia, Canada, and performances fill up his schedule. Samuel was awarded a gold certificate in the grade 8 concert group at the 2015 Kiwanis Fraser Valley International Music Festival. This summer, he is excited to play on his third continent at the Casalmaggiore International Festival in Italy.