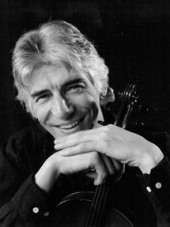 Born in London, Roger Chase studied at the Royal College of Music with Bernard Shore and in Canada with Steven Staryk, also working for a short time with the legendary Lionel Tertis.

He made his debut with the English Chamber Orchestra in 1979, and in 1987 appeared as a soloist at a Promenade Concert at The Royal Albert Hall in London. He has since played as a soloist or chamber musician in major cities throughout the UK, USA, Canada, Australia, Japan, the Middle East, India, most of Eastern and all of Western Europe and Scandinavia.

Chase has been a member of many ensembles, including the Nash Ensemble, London Sinfonietta, Esterhazy Baryton Trio, Quartet of London, Hausmusik of London and the London Chamber Orchestra. He has been invited to play as guest principal viola with every major British orchestra and others in North America and Europe, including with the Berlin Philharmonic. He has recorded for the EMI, CRD, Hyperion, Cala, Virgin, Floating Earth, and Dutton Epoch labels, and has demonstrated his diverse interests by playing with a folk group on an amplified viola, as a soloist on an “authentic” instrument, and as an exponent of the avant-garde.

Chase has taught at the Royal College of Music, the Guildhall School and the Royal Northern College of Music. He has been a professor at Oberlin College, and at Roosevelt University in Chicago. His playing has inspired many composers to write for him, from solo pieces to concertos and chamber works. With pianist Michiko Otaki he has played works inspired by and dedicated to Lionel Tertis in many venues including at the National Gallery in Washington, Princeton University, and in Cleveland, Boston, Toronto, and elsewhere.

Recent recordings include the complete works for viola by Benjamin Dale, hitherto unrecorded concertos by Stanley Bate, W H Bell (“Rosa Mystica”), and Chase’s own orchestration of the Vaughan Williams Romance on the Dutton Epoch label, and a CD of works written especially for Lionel Tertis entitled “The Tertis Tradition”, all on the Dutton Epoch label.

Added lately to his critically acclaimed recordings for Dutton (with pianist Michiko Otaki) are sonatas of Delius and Ireland (transcribed by Tertis) in honor of both composers’ anniversary years in 2012. His most recent release on Centaur includes three Brahms sonatas with Otaki. His Naxos recording “The Virtuoso Viola”  features music by Arthur Benjamin, George Enescu, Joseph Jongen, Henry Vieuxtemps , Nicolò Paganini, Bach/Kodály, Fritz Kreisler, and his teacher, Bernard Shore.