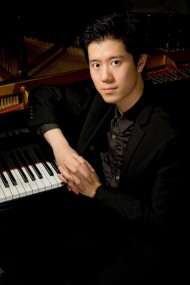 Hailed by the Toronto Star as a “pragmatic musician”, Vancouver-raised pianist Matthew Li made his debut in China with the Xiamen Philharmonic Orchestra in 2006. He has since performed across Canada and also in United States, Austria, China and Hong Kong. Mr. Li was a prize-winner of the 2014 Shean Piano Competition in Edmonton, Alberta, and runner-up of the 2007 Canadian Music Competition. In 2012, he co-founded a piano duo group Duo Interplay with his wife, Melody Chan-Li, and were awarded on their debut performance the Third Place in the 2012 International Northwest Piano Ensemble Competition. Mr. Li is part of the Toronto Messiaen Ensemble. The ensemble is active in contemporary chamber music and has worked with leading American composers including David Crumb, Michael Fiday, and Ofer Ben-Amots.
Mr. Li have attended various music programs over the past summers, including the Mozarteum Sommerakademie, Centre d’Arts Orford, and the Toronto Summer Music Festival. He had the privilege to perform in masterclasses under renowned pianists and pedagogues such as Leon Fleisher, Jacques Rouvier, Arie Vardi, Robert Levin, and Menahem Pressler.
Matthew Li holds a Master of Music degree from Indiana University, where he studied with Emile Naoumoff and Arnaldo Cohen. His earlier teachers include Sara Davis Buechner and Sheila Hardy. He recently completed the Artist Diploma Program at The Glenn Gould School and is currently pursuing Doctor of Musical Arts at the University of Toronto under the tutelage of Marietta Orlov.