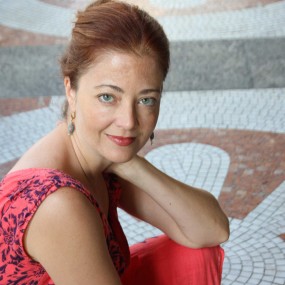 Mezzo-Soprano, Julie Bartholomew was born outside of Chicago, USA. She has appeared on stage in many opera houses as a soloist and young artist including Chautauqua Opera, Opera Theatre of St. Louis, Santa Fe Opera, San Francisco Opera’s Merola Program and Western Opera Theater, Wolf Trap Opera, Glimmerglass Opera, The Caramoor Festival, Atlanta Opera, Central City Opera, Lyric Opera of Kansas City, New York City Opera, Theater St Gallen (Switzerland) and Opernhaus Zürich. Since 2005, Ms Bartholomew has been singing in the professional opera chorus and small roles at Opernhaus Zürich and has had the wonderful experience of singing with the world’s best conductors and singers. Ms. Bartholomew has recorded with Cecilia Bartoli as a member of the International Chamber Soloists the belcanto operas of Norma, Sonnambula and also Maria, her dedication to the historic opera singer, Maria Malibran under the Decca label and in addition has appeared in many DVD and TV recordings from Opernhaus Zürich with stars such as Bartoli, José Cura, Bryn Terfel, Thomas Hampson and Zubin Mehta. Some recent highlights at Opernhaus Zürich have included singing Ancella with Placido Domingo in Simon Boccanegra, Due Creti with Nikolas Harnoncourt in Idomeneo, and as the second alto soloist in Händel’s The Messiah with Ottavio Dantone conducting. Ms. Bartholomew has a Bachelor of Music from the University of Michigan and a Master of Music from the University of Missouri in Kansas City studying with Inci Bashar.  She was previously a semi-finalist in Houston Grand Opera’s Eleanor McCollum competition, The New York District of the Metropolitan Opera Competition and The Sara Tucker study grant competition. Ms. Bartholomew lives in Zürich, Switzerland with her golf professional husband and 2 Thai Korat cats.