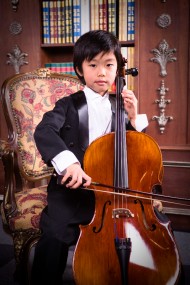 Joseph Wu, 8, has played cello for two and a half years. Since moving from Taiwan to Canada, he has joined the British Columbia Conservatory of Music Junior String Ensemble and the Coquitlam Junior Orchestra. In 2015, he was awarded a gold certificate in the concert group (8 years and younger) at the Kiwanis Fraser Valley International Music Festival, as well as a gold certificate in the duets and trios (junior class) with his brother Joshua Wu. Joseph enjoys playing cello very much. It is an important part of his life, and he is excited to take his playing to the next level by going to Italy to play in the Casalmaggiore International Festival.