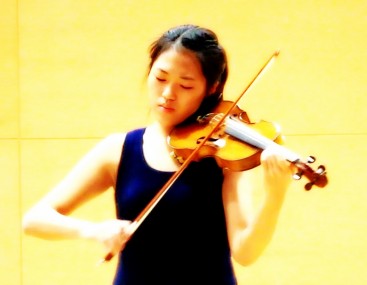 Ellen Ai-Lun Huang currently 16 years old, she has been playing the violin since 6 years old and has been studying with Jimmy Hsueh-Chi Chang (Concertmaster of Kaohsiung Symphony Orchestra and Taiwan Connection Festival) since then.
Ellen have been studying in an international American school (Morrison Academy) for these past 10 years in Taiwan, where she became the recipient of various national prizes. At the age of 13, she was assigned concertmaster position for the junior division of Morrison Academy Symphony Orchestra. For the past few summers she participated in many international music festivals, including the Casalmaggiore International Festival 2014 in Italy and the 23rd Annual Music Festival at Walnut Hill in the United States, which she was privileged to participate in the master classes of Donald Weilerstein, James Buswell, Nicholas Kitchen, Lynn Chang, and Nai-Yuan Hu. During the whole summer of 2014, she also had the opportunity to learn chamber music from professor Nai-Yuan Hu and Lynn Chang.