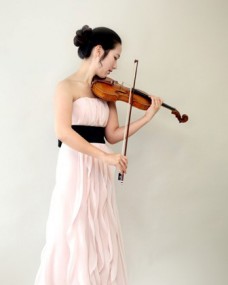 Doreen Dasol Yun, born in 1997, is a young Canadian violin virtuoso who promises to make an important career. Possessing a prodigious musical memory, she has at the age of 17, already performed a large part of the major violin repertoire in Canada, USA, Russia, Germany, Austria, Italy, and Korea. In 2014, she made her debut performance with the Vancouver Symphony Orchestra.
She has won numerous prizes and awards including: 2013, 1st place winner of the Vancouver Youth Symphony Orchestra Concerto Competition, performing the Khachaturian Violin Concerto; 2014, winner of the Vancouver Philharmonic Orchestra Concerto Competition, performing the Elgar Violin Concerto; 2013, and 2014, winner of the Gabora Prize for the outstanding performances of the Tchaikovsky Violin Concerto, the Paganini Concerto in D, the Papanas Overture for solo violin, Prokofieff Violin Sonata in f minor, and the Elgar Violin Concerto; 2011-2015 scholarship winner at the Casalmaggiore International Festival in Italy.
Doreen Dasol Yun performed in masterclasses for Prof. Dora Schwarzberg (Musik Hochschule, Vienna), Midori Goto (Los Angeles), Maestro Raffi Armenian (Montreal), and was a concertmaster of the Vancouver Youth Symphony Orchestra during the season of 2012-2013.
She began studying violin at the age of 7 with Nancy Suk and since 2010 has been studying with Prof. Taras Gabora.