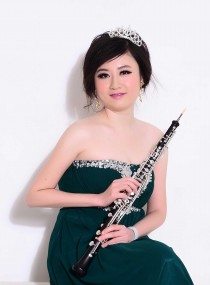 Di Wu a 27 Chinese girl.she has been playing the oboe since 15 years old .and studying with Nie lijia(the professor of the Shandong university of the arts) since 2007.  She held the granduated solo concert in 2014.  Now she is studying with Arnaldo de Felice (a fantansic oboist and the professor of Conservatorio Claudio Monteverdi). For the past few years she participated in many international music festivals, including the 2008 Xi’an International Oboe Festival,2011 and 2014 Beijing  International oboe Festival .