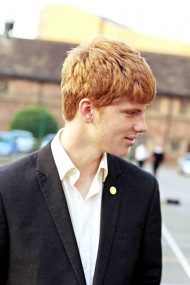 Alexander Meikle-Briggs, born in London on the 10th April 1997, began
playing violin at the age of 5 and started learning the piano at the age of
9. In 2011, after three years at the Royal College of Music where he
continued the violin, piano and composition, Alex furthered his studies at
Chetham’s School of Music with Ben Holland. Alex started playing the viola
in chamber music in late 2013 and in September 2014 took it up as a study.
He was the violist in the Quartet that won the York Chamber Music Festival in the Under 18 category in 2014 and has performed with his current quartet in Norway, Wigmore Hall, Norwich and several other venues in Manchester.
Alex has had several masterclasses with Pavel Fisher, Christoph Richter,
Raphael Todes and has enjoyed being taught by the Carducci Quartet.  In May 2015 Alex was coached for chamber music and solo performance with  Máté Szűcs and took part in masterclasses with Markus Däunert.As of September 2015 he will study Joint Pri  ncipal Study Violin and Viola with Radu Blidar and Suzie Meszaros respectively. Alex has performed in many venues across the UK orchestrally including The Royal Festival Hall, Albert Hall, The Sage.